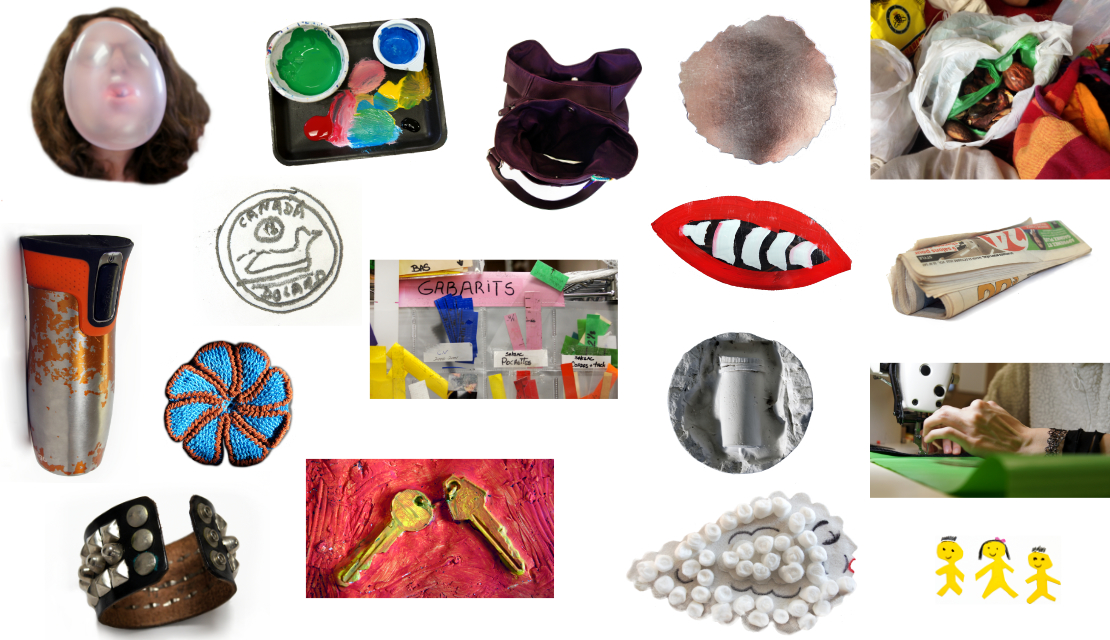 Participate by meeting with the artist

Participate to a virtual tour of the exhibition

[The participatory virtual tours are part of the project “Quand l’art nous parle” supported by the Emergency Community Support Fund, the Government of Canada, and the Laurentides Foundation.]

Quebec artist Raphaëlle de Groot lives a nomadic life between Canada, Italy, and Brazil. This experience has led her to develop a networked, plural, and multi-layered dialogue with groups of people from diverse backgrounds and realities around the notion of mobility. Evolving as she moves between places, the dialogue involves interlocutors who are not connected initially and are separated by distance.

With what is happening to us, Raphaëlle will not be physically present as part of her exhibition which brings together the current state of her project Prépare ton sac - Lab.observatoire de la mobilité, in resonance with a project that she produced as part of the Nuit blanche in Paris, La grande marche des petites choses.

Defined as the ability or capacity to move, to travel, but also to change and evolve, mobility evokes the notion of transformation. This main thread traverses the project as much as the social and geographic borders that drive it do. In fact, de Groot has arrived at a turning point in her practice, and the MAC LAU — the Canadian anchoring point for her project — has also been reassessing its institutional model and practices in recent years in order to redefine its relationship with artists, the territory, the community, and its collection. Following from the intersection of these trajectories, the collective conversation about mobility that de Groot develops with different groups deals with the unique experience of being confronted with starting over. In Saint-Jérôme, she has met with groups of immigrants learning French, people undergoing social and professional reintegration, and others dealing with mental health issues who are also engaged in creative activities. The idea of starting over serves as the link and metaphor for exploring the attitudes, emotional states, and frames of mind present in the face of the unknown. These exchanges reveal a profound need or intense drive to set things in motion despite the challenges, to nourish a mobility of thoughts, emotions, and gestures.

La grande marche des petites choses started at CSB / M and ended five days later on the evening of Nuit Blanche in Paris, at Les Grands Voisins, a temporary occupation site focused on social inclusion. The project traces a link between two urban sites, that observed at CSB-Montfermeil (arrival of the tram and construction of the metro) and that of Les Grands Voisins (construction of a future Eco-neighborhood); projects that are also those of various solidarities linked to migratory movements and immigration.

The course of the walk and the performative gesture developed during this journey are the result of research, interviews and preparatory meetings with residents of CSB / M, young foreigners isolated from the Foyer Concorde de Montfermeil, people in vulnerable situations. Hosted at Les Grands Voisins with various actors / observers of the territory including artists from the Ateliers Médicis.

From the Forest of Bondy, following the route of the Dhuis aqueduct - which until the 90s brought drinking water to Paris (now diverted to Disneyland) -, La grande marche des petites choses evokes a current, a link, a connection to activate in a gesture of attention and listening. Our gaze turns to the unnoticed dimension of urban debris of all kinds that migrate all around us. La Traine, an “accumulation support” carried by the artist and the participants throughout the journey, can also be seen as a kind of skin of the changing world.

In Saint-Jérôme, de Groot is collaborating with Les Impatients from the Integrated Health and Social Services Centre (CISSS) of the Laurentians, the work integration social enterprise Atelier Éclipse, and the Continuing Education Department of the Cégep de Saint-Jérôme.

The artist thanks the Canada Council for the Arts and the Government of Quebec for their support.

Pay what you wish